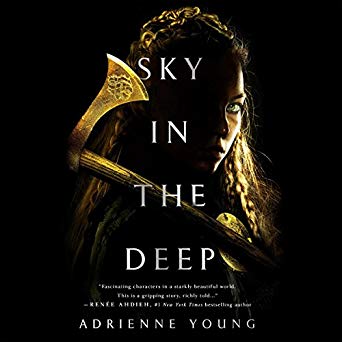 Raised to be a warrior, seventeen-year-old Eelyn fights alongside her Aska clansmen in an ancient rivalry against the Riki clan. Her life is brutal but simple: fight and survive. Until the day she sees the impossible on the battlefield—her brother, fighting with the enemy—the brother she watched die five years ago.

Faced with her brother’s betrayal, she must survive the winter in the mountains with the Riki, in a village where every neighbor is an enemy, every battle scar possibly one she delivered. But when the Riki village is raided by a ruthless clan thought to be a legend, Eelyn is even more desperate to get back to her beloved family.

She is given no choice but to trust Fiske, her brother’s friend, who sees her as a threat. They must do the impossible: unite the clans to fight together, or risk being slaughtered one by one. Driven by a love for her clan and her growing love for Fiske, Eelyn must confront her own definition of loyalty and family while daring to put her faith in the people she’s spent her life hating. (via Goodreads)

To Adrienne Young, the author, and Khristine Hvam, the narrator:

I was completely, utterly blown away by this book.

I did not expect to love this as much as I did. Vikings wasn’t the most appealing concept to me, but it’s been a long time since a book consumed my thoughts as much as this one. So much so that when the audiobook came to a close, I was tempted to go back to the beginning and listen again.

Sky in the Deep has one of the most unique plots I’ve ever seen in the YA genre. It seems so simple– a few Viking clans fighting each other– but it is compelling.

I will say that it is rather violent at times and I did squirm more than once during battle and medical scenes. But that comes with the territory.

Layered into this epic plot is an immense amount of character development. Eelyn goes through a beautifully written inner battle as she is forced to abandon everything she’s ever been taught about the Riki, her supposed enemy. It’s exquisite.

As a character, Eelyn is a strong, independent, brutal woman. I loved her. She’s going to be living in my heart for a long time. I loved seeing her strength, physically and emotionally. She was just a wonderful character throughout the entire book.

And now I would like to introduce you all to my new boyfriend. His name is Fiske and he’s Riki. He’s also dark and brooding and exceptionally attractive. We’re madly in love.

Ahem. Yes, I fell in love with a fictional character again. Fiske is such a good character on his own, but together, he and Eelyn were something else. They had so much chemistry from the very beginning and I think they may be my second favorite enemies-to-lovers romance now (Jurdan is first and that’ll be hard to beat).

Eelyn’s Aska family- her father and her best friend- weren’t my favorite characters ever, but in the end, I still found them fascinating. Myra had her own outstanding arc that drove me crazy but also made me love her.

I loved Iri (I think I spelled that right?) and his Riki family, too. They were all wonderful characters and I kinda wish I could live with them for a few days.

If it’s not obvious, I gave Sky in the Deep a 5-star rating and I recommend it to anyone after a unique story with wonderful characters.

Have you read Sky in the Deep? What did you think?

4 thoughts on “Review: Sky in the Deep by Adrienne Young”